Encouraging Word Of The Day

Perspective is defined as a particular way of looking at something.  I learned a long time ago that  how I view something will almost always determine my attitude about the thing I’m viewing.

Nearly a decade ago I took on a personal responsibility regarding a relationship.  This was a very challenging relationship and at times it drained me of all of my mental energy.  One day as I was driving to fulfill my responsibilities, someone called me and asked what I was doing, and I said that “I have to go see X”.  I meant “have” like I was in prison, to give you the full impression of where my heart was at that moment.

The Lord spoke to my heart after the call and He said to me, “Why don’t you say ‘you get to go see X’ instead of you ‘have to.'”  That kind of got my attention, and so I repeated out loud what He had spoken into my heart.  Almost immediately my heart changed regarding this relationship. Although it most certainly has been challenging, there is far more joy and energy for this relationship simply because I adjusted my PERSPECTIVE regarding it.

Therefore, I encourage you to look at those things which wear on you and think about how you can go from saying “I have to” and start saying, “I get to.”  It will change your entire perspective because the “I get to” perspective brings about gratitude which changes everything in one’s heart.

I always teach our leaders to make public policy personal and emotional to the voter.  This approach helps them to feel the injustice of those policies which work to destroy our personal liberties.

Nothing is more true than the vote the senate took this week on whether or not they believe they have the right to impeach Trump despite him not being in office, nor the Chief Justice presiding over the senate trial.  Right now, the arguments being made by those on both sides of the aisle are about Trump and his actions.  However, this misdirects the citizen from what that vote was actually about.

Watch how the below statement takes the argument away from Trump and makes it personal and emotional to our fellow citizens.

Sen. Sasse (NB), Sen. Cassidy (LA), Sen. Murkowski (AK), Sen. Collins (ME), Sen. Toomey (PA), Sen. Romney (UT), and all 50 Democrat senators voted to approve this illegal act.  Sen. Toomey already announced his retirement last October.  The most surprising was Sen. Cassidy of Louisiana.  There is no way any of these Republicans can win their next primary.

“Inaction breeds doubt and fear. Action breeds confidence and courage. If you want to conquer fear, do not sit home and think about it. Go out and get busy.”
— Dale Carnegie

Vintage illustration of a Supreme Court over worked. 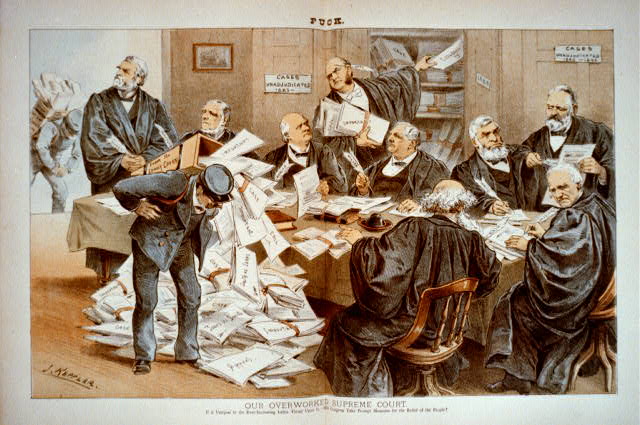